The beginnings of colour TV in the UK – 405 line NTSC. 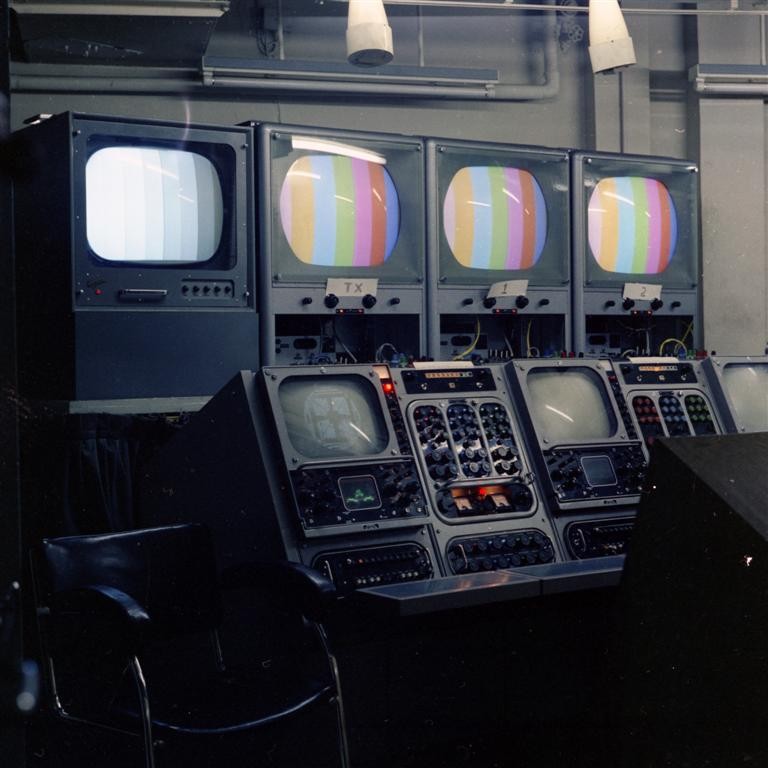 The concept of television goes back as far as 1911 when Vladimir Zworykin transmitted crude images. In fact, images were transmitted over the telegraph network as early as 1856.

The above photograph, taken in 1959, shows the experimental colour studio used by the BBC at Alexandra Palace. The colour tubes were imported from the USA. Additionally, the cameras used were RCA clones, made by Marconi, to U.S. designs.

Baird, in the UK was a pioneer of mechanical television, in the 1920’s.

Colour in the U.S.

By 1940 an experimental field sequential colour system had been demonstrated. This used a black and white tube with a spinning colour wheel. Notably, this system was actually adopted as the colour standard but was thankfully, later dropped.

The CBS sequential system had many shortcomings, including noise from the spinning wheel, colour fringing and screen size limitations. In fact, to get a 23″ picture, the disc would have to have been, an impractical 2m across!

However, between June and October 1951, 111 hours of colour broadcasting took place across six U.S. Cities. Below is a screen grab from one of the programmes.

Colour from the moon

Because of the size limitations of colour cameras, in the 1960’s, the only way to get a colour broadcast from the moon, was to use a field sequential system. The lunar cameras also used a miniature spinning colour wheel. The colour smearing on movement is very obvious.

These remarkable cameras were in use well into the 1970’s. Before the TK series RCA used two experimental cameras to develop the system. These were in use from 1947, in the RCA Wardman Park studios in Washington.

The Marconi colour camera, seen in this Panorama program from 1956, was…..

TK 40 cameras – Eyes of a generation